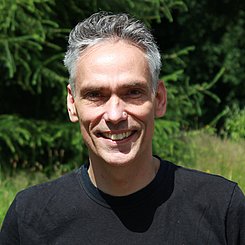 Ullrich R. Pfeiffer received the diploma degree in physics and the Ph.D. in physics from the University of Heidelberg, Germany, in 1996 and 1999 respectively. In 1997 he worked as a research fellow at the Rutherford Appleton Laboratory, Oxfordshire England.

From 1999-2001 he was working as a Postdoctoral Researcher, at the University of Heidelberg on real-time electronics for particle physics experiments at the European Organization for Nuclear Research (CERN), Switzerland.

From 2001 to 2006 he was with the IBM T.J. Watson Research Center where his research involved RF circuit design, power amplifier design at 60GHz and 77GHz, high-frequency modeling and packaging for millimeter-wave communication systems.

In 2007 he received a European Young Investigator Award and lead the THz electronics group at the Institute of High-Frequency and Quantum Electronics at the University of Siegen, Germany.

Since 2008 he holds the High-frequency and Communication Technology chair at the University of Wuppertal, Germany.

He is an IEEE Fellow, an Associate Editor of the IEEE Transactions on Terahertz Science and Technology, and serves as an Editorial Board Member of the Journal of Infrared, Millimeter, and Terahertz Waves. From 2016-2017 he was the President of the German Association (Fakult¨atentag) for Electrical Engineering and Information Technology e.V. (FTEI), Germany. In 2014/15 he was an IEEE SSCS Distinguished Lecturer and currently serves as a Scientific Advisory Board Member of the Academy of Finland’s Flagship Program 6Genesis. He served on the technical program committee of the International Solid-State Circuits Conference, the European Solid-State Circuits Conference, the Bipolar/BiCMOS Circuits and Technology Meeting, the Silicon Monolithic Integrated Circuits in RF Systems Conference, and the European Microwave Integrated Circuits Conference.

He has authored and co-authored 200+ publications and has been principal inventor and co-inventor of 10+ US and international issued patents, relating to RF, millimeter-wave, terahertz communication/imaging circuits and sensors.